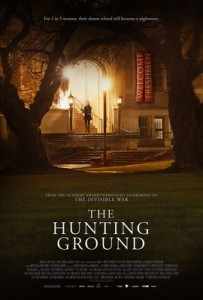 “The Hunting Ground,” if you haven’t already heard of it, is a documentary about the widespread incidence of sexual assault on US college campuses which I, especially as a survivor of childhood sexual abuse, found very moving as well as very enlightening.

It shows how power differentials, between victims/survivors and school administrations, and a drive by administrations to preserve a school’s image and reputation if at all possible, combine to enable sexual assault on college campuses nationwide.

And it’s about how the determination of two victims/survivors to change things for the better led to substantial intervention by the federal government to compel schools to begin taking the rights and needs of campus sexual assault victims/survivors seriously.

And here is a link with statements by some of the survivors who appeared with Lady Gaga in her performance at the 2016 Oscars performance of her Oscar-nominated theme song for “The Hunting Ground.”